TLALOC-Net, the research network applied to climate and physical processes that control earthquakes and volcanoes 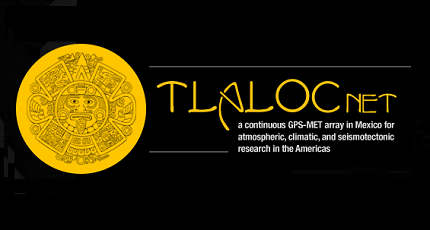 The TLALOC God was feared for his ability to discharge rain, hail and lightning over the earth. Now, this elements are expected to be observed through the GPS network that is part of the "Long-Term Terrestrial and Atmospheric Transboundary Observatory and Collaboration Network" (TLALOC-Net).

(Source: CUDI) TLALOC-Net is a network of Global Positioning System (GPS) and meteorological stations in Mexico, developed for the study of atmospheric and solid earth processes. This newly created network spans most of the country with a strong focus in southern and western Mexico.

The observations made through TLALOC-Net will allow a better analysis of the energy accumulation and release processes throughout the Mexican subduction zone, the Gulf of California fault system and surface deformation processes, as well as provide estimates of water vapor that will contribute to the advancement of knowledge of atmospheric processes in Mexico.

Eight years have passed since 35 international scientists from 22 universities and research centers, members of the National Research and Education Networks (NREN) of Latin America, North America and Europe met in Puerto Vallarta to attend a workshop promoted by the National Science Foundation (NFS) and CONACyT, and to analyze the fundamentals, uses and implementation of a state-of-the-art atmospheric and GPS network in Mexico with a view to enabling applied climate research, weather forecasts and the physical processes that control earthquakes and volcanoes.

One of the main achievements of the meeting, which was fundamental for the implementation of the project, was the written declaration signed by 12 Mexican scientists to integrate a first consortium of Mexican researchers and institutions that shares its data openly, works unified to defend and facilitate GPS-based science in Mexico and strives to develop the human and technical capacity of the country for cutting-edge research and prediction of hazards.

Among the universities that signed the collaboration agreement for the creation of the unified GPS network of Mexico are:

Among the international institutions that are part of the agreement are:

This work team continues to hold productive meetings to further identify and align the meteorological and geophysical interests of Mexican and US universities and government agencies.

In light of the scientific responses motivated by the numerous applications and benefits of TLALOC-Net, a white paper was created to lay the foundations for possible funding requests for NSF and CONACyT. With a properly coordinated implementation, TLALOC-Net promises to be a landmark in the promotion of natural science research in Mexico through the open exchange of new data types of the network and the collaborative work of a new generation of Mexican and American scientists who will use the system as its main research tool.

There have also been strong links between US and Mexican scientists as both countries share many of the challenges and climatic, atmospheric, hydrological and solid earth processes that TLALOC-Net intends to explain, as explained by the Dr. Bertha Márquez, Coordinator of the TLALOC-Net in Jalisco, CEED Professor-Researcher at the University of Guadalajara and Coordinator of the Earth Sciences community at CUDI.

"For the Earth sciences, TLALOC-Net improves continuous detailed studies of earthquake behavior, tectonics of subduction zones and subsidence of the terrain. The Mesoamerican trench is an ideal natural laboratory for detailed geodetic studies and TLALOC-Net provides additional limits on the movement of the North Pacific plates and a large number of observations on the seismic subduction cycle", explains Dr. Marquez.

"Each of the TLALOC-Net stations is built on rocky outcrops, otherwise a deep, reinforced monument is built to ensure antenna stability. The antenna is the Trimble Choke Ring (GNSS) model and the GNS Trimble NetR9 receiver, with L1, L2 and L5 bands. 40% of stations have a Vaisala WXT520 multitemporal sensor - weather sensors.”

"The meteorological sensor generates a series of superficial observation measurements of wind speed and direction, barometric pressure, air temperature, humidity as well as precipitation and precipitated water vapor in the total column which are placed with GPS / GNSS observations (5- 30 minutes) for the BINEX real-time data registration and flow. "

"Data transmission to most TLALOCNet stations is based on cellular networks that use Sierra Wireless LS300 modems, which are expensive", explains Dr. Marquez.

How does TLALOC-Net contribute to the monitoring, prognosis and research of tremors in Latin America and Mexico?

As has been mentioned in several forums, Latin American countries share a similar culture and history, as well as a complicated tectonic context. Along the Pacific coast, from Mexico to Chile, there is a subduction because of the Rivera, Cocos and Nazca plates, with high rates of seismicity, similar to what occurs in the eastern part of the Caribbean plate, including Puerto Rico, Jamaica, Lesser Antilles, part of Cuba, and several countries of Central America. In the part of South America we have the plate of the same name that covers this part of the continent and the portion of the South Atlantic Ocean.

For the Earth sciences, TLALOC-Net improves detailed ongoing studies on earthquake behavior, tectonics of subduction zones and subsidence of terrain. The mexican Jalisco-Chiapas subduction zone, as already mentioned, is ideal for detailed studies on the seismic surveying cycle of subduction which includes coseismic break, postseismic failure rebound and viscoelastic rebound, episodic slip and elastic deformation. TLALOC-Net provides additional margins in the movement of Pacific North America plates (DeMets et al., 2014) in a critical transition of oceanic and continental transform faults and also provides a large number of comments on the seismic cycle of subduction.

The episodic tremors and landslides, first discovered a decade ago in Cascadia (Rogers y Dragert, 2003; Dragert et al., 2004; Melbourne et al., 2005) and Japan (Obara, 2002; Obara et al., 2004) are now being studied with the recently renovated geodetic infrastructure in Mexico to improve the temporal and physical relationship with the genesis of shallow earthquakes, which endanger the populations that live closer to major subduction zones around the world.

It is important to emphasize that no current method or technology allows to know when an earthquake will occur. Earthquakes can not be predicted and Mexico is located in a tectonic context in which large earthquakes can occur at any time.

"Establishing a relationship between different working groups in Latin America and CGPS ​​networks like TLALOC-Net contributes to the advancement of the monitoring of hazards to be studied, as well as observable geophysical processes from where we take advantage to establish an initial backbone of geophysical observations, as multidisciplinary research platforms focused on translating scientific advances into social benefits", explains Dr. Márquez.

CUDI, the National Research and Education Network in Mexico and the TLALOC-Net project

As the UDG is an interconnection node of the CUDI communication backbone and hosts the TLALOC-Net project server, technologically we are inside the university infrastructure, also serving CUDI users and the general public that can access the information available in the TLALOC-Net project's collection at http://tlalocnet.udg.mx", said Dr. Márquez.

I think we should explain that CUDI is responsible for administering, promoting and developing the National Research and Education  Network (NREN) of Mexico, and increasing synergy among its members. This kind of networks has an impact on the support of researchers from the corporation member institutions.

Academic networks are drivers of innovation, where various tests are developed at national and international levels that result in new services that facilitate solutions. Hence, advanced networks stimulate innovation in areas of research and education.

The power of an NREN is not only technology, it is in all of those who participate, who meet with their technology colleagues and researchers to explore ideas, share knowledge, make better practices and develop projects for the common good ", adds Dr. Márquez

The NREN provides information of ultra speed, as well as customized services, dedicated to the needs of the investigation, so when we are studying a complex and dynamic system as it is the Earth, it leeds us to try to understand the inner workings of our planet, at least in the area of our interest, where is possible to observe directly, from studies through various types of GPS sensors and seismometers, depending on the discipline to be developed.

In the case of TLALOC-Net, the information using GPS technology provides a precise millimetric positioning, which will be assimilated in numerical models such as the coupling level between plates, volcanic deformation, the short-term prediction of extreme weather events and the Convective system analysis, contributing with indispensable information for the study, monitoring and forecasting of severe geological and atmospheric processes.

CUDI, through the members of the Networks Committee, is collaborating to obtain connectivity in the places where the continuous monitoring stations are located.

As part of future actions and to give continuity to the project, the NREN could collaborate with the UDG to manage the Jalisco State Government to extend the TLALOCNet network, remembering that Jalisco is located within a seismic zone and that the possible risks should be anticipated; in addition it could provide other services”, concludes Dr. Bertha Márquez.