Thanks to the ALICE2 project, jointly funded by the European Commission through its @LIS2 programme, the capacity of the transatlantic link has increased from the 622-Mbps connection between Europe and Latin America that was in place at the beginning of the project, to 2.5 Gbps, strengthening collaborative research between the communities of both continents. 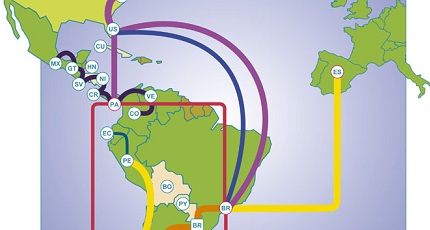 (Santiago, Chile, April 24, 2012) Scientists and academics from 13 Latin American countries, nearly 800 universities and research centres, over fifty regional research communities and projects ranging from radioastronomy to the recovery of pre-Hispanic musical heritage are seeing in short time significant increases in their opportunities for collaboration with Europe through the establishment of a link that increases the capacity of the connection of RedCLARA with the pan European network GÉANT to 2.5 Gbps, that is four times the capacity that the link had at the beginning of the project. Thus, within the context of the ALICE2 project (Latin America Interconnected with Europe, version 2), the regional advanced network, RedCLARA, has given a further boost to the development of science, research and innovation in Latin America and strengthened collaboration with Europe.

Since its creation in 2004, RedCLARA has been crucial for research and education in Latin America, offering collaboration environments to the scientific community at regional, international and global levels, by means of its connections to GÉANT and Internet2 (USA) and through them with advanced networks in the rest of the world.

The current and advanced collaboration projects carried out over RedCLARA have expanded the development of the areas of research and education. Projects in Astronomy, such as EVALSO, EXPReS and AugerAccess, are linking observatories in Chile and Argentina with peer institutions in Latin America and Europe, and grid computing initiatives such as GISELA and CHAIN share technical resources and aim to reduce the time to solve problems in research between these two continents, in the case of the former, while at the same time they aim to define a strategy to ensure the coordination and interoperability of European grid infrastructures with those of Latin America and the rest of the world. Scientists from Argentina, Bolivia, Colombia, Ecuador, Guatemala, Mexico, Peru, Venezuela, Spain, France and Italy are collaborating in the LAGO initiative in order to measure the radiation of gamma ray bursts and solar activity. Students, academics, musicians, anthropologists, museologists and engineers from Bolivia, Colombia, Chile, Ecuador, Mexico, Venezuela and Spain are doing research on pre-Hispanic Andean musical instruments in order to recover their sounds and the immanent historical tradition. In e-Health, thanks to the support from the IADB, twelve Latin American countries are joining efforts in order to implement regional public policies on Telehealth, and the Pan-American Health Organisation (PAHO) finds here a starting point for the development of certain analyses required by its strategies.

These projects and the enormous amount of initiatives in which Europe and Latin America are collaborating in favour of the development of science, research and innovation, will be largely benefited by the new capacity of the transatlantic connection that is now available.