FECYT-Spain is the new member of LA Referencia 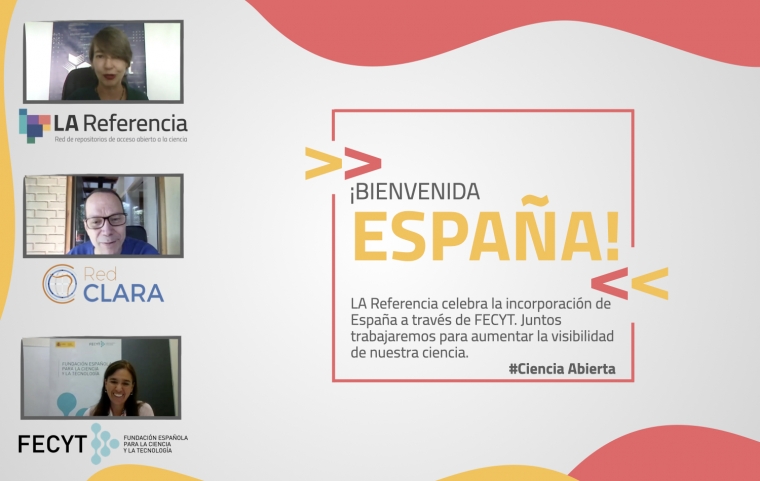 This Wednesday, October 21, Spain became the new member country of LA Referencia, the Latin American network that has associated countries working for Open Science. The adhesion agreement was signed through a virtual conference by Cecilia Cabello, director of the Spanish Foundation for Science and Technology (FECYT), Bianca Amaro, president of LA Referencia, and Luis Eliécer Cadenas, executive director of RedCLARA.

(Source: LA Referencia) In this way, Latin America and Spain consolidate, now in the field of Open Science, their historical tradition of scientific and technological collaboration, an aspect that promotes accessibility and the generation of ideas that aim to unite different visions in a common front for Open Science.

Bianca Amaro explained the importance of this agreement for the network. “The union of a country like Spain is a great advance, both for the LA Referencia and for itself. It is very important because we strengthen what we do within the network: the strength of Spanish-speaking science", she said.

In turn, Luis Eliécer Cadenas, executive director of RedCLARA, highlighted the collaboration processes that united Latin America to Spain, as well as the need to continue paving the way in these areas. “This alliance is very significant because RedCLARA and the national education networks have a very important history of cooperation with Spain and Europe. We are structuring a network of support and collaboration that, eventually, can increasingly place science and investments in education and scientific advancement at the service of economic development in Latin America and at a global level”, said Cadenas.

The director of FECYT, Cecilia Cabello, expressed her enthusiasm for the incorporation of Spain into LA Referencia's efforts in science and open access. “Today is a big day for FECYT, but above all for the Spanish science and technology system. RECOLECTA has become a fundamental tool to fulfill the national open access mandate, as well as a fundamental part of the initiatives we have in the field of open science. The signing of this agreement places us internationally in a strategic position that will bring us enormous benefits. This alliance will strengthen the relationship between Spain and Latin America and strengthen the visions of open access and open science in a much broader geographic space”, said Cabello.

Cabello took advantage of the space to mention the possibilities that this incorporation opens up for Spanish-speaking countries: “This union with Ibero-American countries contributes to FECYT's institutional commitment to strengthening science in Spanish, as it will exponentially increase the visibility of science from Spain collected in RECOLECTA ”.

Bianca Amaro, in turn, ended the signing of the agreement, recalling the importance of this incorporation: “Now we are one working for the scientific development of our countries; together we are stronger. I believe that progress, development and the great achievements that we can get are now at our disposal."

Spain adds its national aggregator, RECOLECTA, to LA Referencia, whose objectives are to promote and coordinate the Spanish national infrastructure of open access digital scientific repositories and to ensure that they are interoperable according to the standards of the world community; promote, support and facilitate the adoption of open access by all researchers from Spanish universities and R&D centers and give greater national and international visibility to the results of research carried out in the European country.