Juan Pablo Carvallo, Director of CEDIA: "I firmly believe that academic networks can change the world” 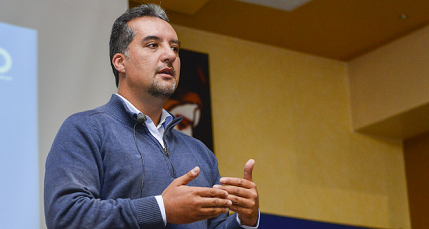 Elected for another mandate ahead of the ecuadorian advanced network, RedCEDIA, Juan Pablo Carvallo has big dreams, but that does not seem impossible for who lead the organization that is slowly changing the reality of research in Ecuador. "We have carried out projects that five years ago I did not imagine were possible," he says. In this interview, Carvallo reviews the achievements of CEDIA, reveals his plans for the future of the network and tells us his impressions about the new moment of RedCLARA.

After so many years leading CEDIA, how do you evaluate the work carried out until today? Are you satisfied with the evolution achieved by the network?

I am definitely satisfied with what we have achieved as a network. We have carried out projects that five years ago I did not imagine were possible. For example, the fact of having the optical fiber, the CEDIA cloud, the Facebook and Akamai caches, the Peering agreement with Internet2, improved channels with RedCLARA; the success of our CEPRA and CECIRA calls, which have been a fundamental pillar for the development of research in Ecuador.

Now, a new horizon opens up in CEDIA. We get the stage of promoting innovation and technology transfer. We hope that the result is successful and that we'll reach this goals.

CEDIA has one of the best infrastructures in the region, well-consolidated initiatives, a strong community ... what keeps you motivated to continue leading the network?

There are so many motivations, but what I have always said is this is the first job I have had in my life in which I really believe that I can generate a change in society. I firmly believe that academic networks can change the world. Through technological services, we seek to generate research and knowledge, that is what really matters for the development of society.

It is known that you see CEDIA as a tool for the development not only of its members, but of the entire country. In what ways does CEDIA already do it and what are its plans to advance even further in this objective?

There are several ways in which CEDIA is a tool for development of Ecuador. Currently, twenty percent of the researchers in the country fund their research through us. Our network has been the articulating axis for higher education institutions to work collaboratively. We have generated confidence in the use of cloud services, a great achievement and a step towards the technological advance of the country.

Undoubtedly, we will advance more by linking with the public institutions of the country; even though CEDIA is an autonomous private entity, it is essential to have an approach and support from public bodies such as SENECYT. In this way, we will develop better and faster several of the objectives that we have, as the Supercomputing Network, the network of national Innovation Hubs, the connectivity with public institutes of higher education, etc.

The ideas are innumerable, sometimes it lacks resources but the important thing is to know where we want to go and, therefore, resources can be obtained with management.

How do you expect CEDIA to be at the end of this mandate?

I hope that at the end of the mandate we are much more integrated to RedCLARA, that we can provide services to the other NRENs and receive services from them. To reach it, our connection infrastructure with RedCLARA has to improve a lot. We have very exciting projects and I think we will achieve it with Luis Eliécer Cadenas, with whom we have talked and traced many horizons. I have a lot of faith in Luis, I think he is the Director that the Latin American Network needed at this moment.

With regard to our internal projects, I hope that the area of innovation and technology transfer will be the link for the development of entrepreneurship and innovation and that national and international public bodies will consider us as an organization capable of managing funds for innovation and linking projects. If we achieve this in the next three years, it would be a great victory.

In what ways is CEDIA committed to the development of the Latin American ICT community, at this time in which initiatives like BELLA are being developed and in which new countries of the region are being integrated into the regional network?

We are completely committed, particularly with RedCLARA, and as CEDIA Network Director I think it is fundamental because it is our support and it is an organization that has a lot to give. RedCLARA is reborn with its new Director and I believe that through them we can do a lot to the development of ICT in Latin America: university technological development, provision of specialized services, training and, of course, the BELLA project, especially the terrestrial part, which is a mechanism for linking and strengthening Latin American networks.

In the future, the countries that will be integrated into the regional network are those of Central America: Nicaragua, Panama, Guatemala. CUDI, in Mexico, has had local initiatives and RedCLARA already has several activities to link these countries to the network. By our part, we have generated some initiatives in the search of linking more to Panama and our commitment with this project is total.